Nathan Robinson is a self-described “leftist” who publishes Current Affairs Magazine and was a regular columnist for The Guardian. Throughout 2020, he was mocking conservatives on Twitter claiming that Cancel Culture did not exist.

Now his column in Guardian has been canceled because of a backlash over a tweet he made opposing US Military aid to Israel.

Robinson claimed that either by law or by de facto law, every US Spending bill must include new military spending for Isreal. Robinson says that the tweet was meant as a joke and not something that was supposed to be taken in a literal sense. In the $2.3 Trillion combined Coronvirus Relief/Omnibus Spending bill passed last December, Isreal got $500 million for a new surface to air missile defense system. In the fiscal year 2019, the US gave Isreal $3.8 Billion in Military Aid and $8 Billion in loan guarantees.

The editors of the Guardian sent Robinson an e-mail claiming that he was promoting “hatred” against Jewish people by exaggerating how much power they have in the United States.

Robinson just published an article on his Current Affairs website saying that there is a dangerous culture of censorship around criticism of Isreal.

It is widely recognized that critics of Israel, no matter how well-founded the criticism, are routinely punished by both public and private institutions for their speech.
…

Personally, I had never thought about the question of whether I could suffer consequences for criticizing the government of Israel (and U.S. support for it). I have just about as much “free speech” as you can get in this world. Perhaps I should have thought about it more, though, because as soon as I crossed an invisible line, it was very quickly made clear to me. The moment I irritated defenders of Israel on social media, I was summarily fired from my job as a newspaper columnist.

Robinson says he is lucky that he has his own independent media in which no one can fire him. A week ago, rapper Tom MacDonald published a new song called Cancelled. He boasted that since he was fully independent, there was no record label that could “cancel” him. Now Amazon, Apple, Pandora, and Spotify have all begun censoring his music.

Robinson still has a long way to go before he experiences the true horrors of cancel culture.

Between 2007 and 2014, Pew Research demonstrated over and over that the black vs white household income gap was far from the largest income gap in the USA. Specifically, ethnic and religious income gaps existed […]

This weekend, the Conservative Political Action Committee [CPAC] is holding its annual conference in Orland. This year’s theme is opposition to canceled culture and censorship. Panels discussions will include censorship and big tech deplatforming. Ironic […]

Demonstrations calling for “Solidarity with the people of the Gaza Strip” occurred in three places in Berlin over the weekend. The largest was in the district of Neukölln, where thousands of people marched on Saturday. […] 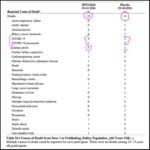