During the Joe Biden/Anderson Cooper “Townhall Meeting” in Milwaukee on February 16th, Cooper asked Biden about the Chinese government’s campaign against the Uyghurs. A Turkic people on the western fringe of China that has historically practiced Islam.

China currently has one million Uyghurs in concentration camps, while the government works to reduce their population through sterilization and forced marriages with non-Uyghurs. The Chinese government has also moved hundreds of thousands of non-Uygurs into the area to change the region’s culture and character. Islam as a religion is now almost entirely banned.

In the United States, the Chinese embassy recently tweeted that the Chinese government had successfully stopped Uyghur women from being “baby-making machines.“

The question came out of the blue. Biden talked about the need for America to take in as many as a quarter-million “refugees” per year from countries like Sierra Leon and Syria. Biden suddenly brings up China for no apparent reason. So Anderson asks him about the Uyghurs.

Biden rambles on almost incoherently for a few minutes and then blurts out that China’s president is just following cultural norms.

You remember — I remember you questioning me when I came back from China. And I said, I predict, within less than a year, they’re going to end their One-China policy. And I got clobbered by saying — because they said: Biden didn’t talk about the fact that how immoral it was. And it was when we were running against the Republican ticket led by Mitt Romney, a fine guy.

COOPER: You just talked to China’s president, I believe.

COOPER: What about the Uyghurs? What about human rights abuses in China?

We must speak up for human rights. It’s who we are. We can’t — my comment to him was — and I know him well, and he knows me well. We’re — a two-hour conversation.

COOPER: You talked about this to him?

BIDEN: I talked about this too.

And that’s not so much refugee, but I talked about it. I said, look — Chinese leaders, if you know anything about Chinese history, it has always been the time China when has been victimized by the outer world is when they haven’t been unified at home.

So, the central — to vastly overstate it, the central principle of Xi Jinping is that there must be a united, tightly controlled China. And he uses his rationale for the things he does based on that. I point out to him, no American president can be sustained as a president if he doesn’t reflect the values of the United States. And so the idea I’m not going to speak out against what he’s doing in Hong Kong, what he’s doing with the Uyghurs in western mountains of China, and Taiwan, trying to end the One-China policy by making it forceful, I said — by the way, he said he gets it.

Culturally, there are different norms that each country and their leaders are expected to follow. But my point was that, when I came back from meeting with him and traveling 17,000 miles with him when I was vice president and he was the vice president — and that’s how I got to know him so well, at the request of President Hu — not a joke — his predecessor, President Hu, and President Obama wanted us to get to know one another, because he was going to the president.

Six Attorneys General have signed a letter to Joe Biden warning him not to attempt to rule via executive fiat and assume powers not granted to him by the constitution. Nor should he sign any […]

Biden’s cabinet does not reflect the demographic make-up of the United States, not even close

US President Joe Biden pledged that his cabinet would be the most diverse in history and reflect the demographic make-up of America. His team has posted his picks for his 25 cabinet-level positions on the […]

Flashback: Biden sounded exactly like Trump on Mexico and Immigration in 2006 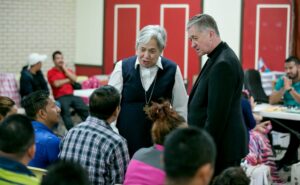